At the groundbreaking event in June 2021, Mission Rock Leadership and Mayor London Breed spoke about the Mission Rock in San Francisco project being guided by innovation, inclusivity and inspiration. The project will generate as many as 13,000 jobs for construction workers, small business owners, and professionals. Officials repeatedly emphasized a focus on inclusivity in hiring — with a goal of 30% local workers, 20% local business enterprises, and a one-million-dollar investment from Tishman Speyer in workforce training programs. 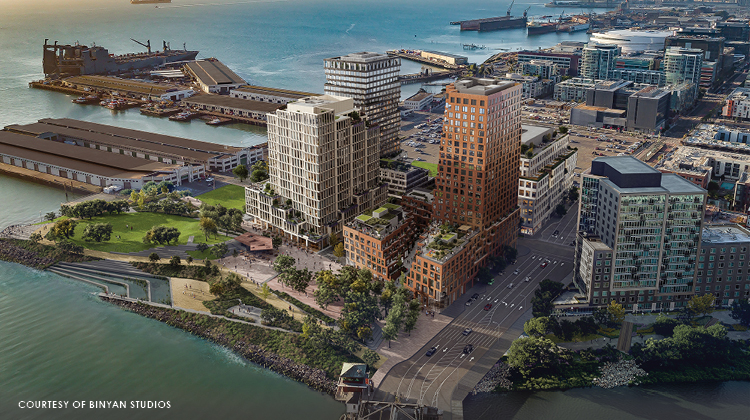 Mission Rock fronts China Basin and the San Francisco Bay; the Bay to the east and China Basin to the north (across from Oracle Park). The project incorporates design approaches to accommodate sea level rise as projected by the National Academy of Sciences and referenced by the California Sea-Level Rise Guidance documents.  As part of the project approach to site resiliency, the grades are raised approximately 4.5 to 5.5 feet at the center of the site, which places it above adjacent grades of the surrounding Mission Bay development area. As the surrounding Mission Bay development is constructed on compressible soils and has been subject to settlement, raising site grades would typically be a constraint on designs. With that in mind, BKF worked directly with the project’s geotechnical engineer to raise the streets using lightweight cellular concrete (LCC), which is about a fifth of the weight of standard soil fill. The process for incorporating LCC included removal of existing soils and adding 10-15 feet of LCC throughout the streets and open space areas. This process offsets the added weight of soil that would have created additional consolidation settlement at the site and required more substantial long-term performance and maintenance costs.

The other elements BKF is designing to help mitigate settlement are flexible utility connections on utility laterals serving the proposed buildings, as well as on the public and private utility mains at the interface with the existing roadways that serve the site (Third Street, Mission Rock Street, and Terry A. Francois Boulevard).

To coordinate designs between multiple architects, MEP consultants, and contractors, BKF led the development of a complete civil 3D model of all the wet utility systems (infrastructure) and grading surfaces.  This information was integrated into project BIM software to ensure utility and grading designs were coordinated between the horizontal infrastructure within the streets and open spaces and the vertical building designs.

Infrastructure Design with Sustainability in Mind

From an infrastructure standpoint, Mission Rock is the first project in San Francisco to implement a District-scale Black Water Treatment Facility. The Black Water System collects and treats on-site sanitary sewage from multiple buildings to generate a reclaimed water source that supplies irrigation, flushing or industrial cooling demands project-wide. This approach acts to reduce both the volume of sanitary sewage being delivered to the City’s treatment plant and the project’s reliance on limited potable water sources.

Secondly, the project is constructing a District Energy Utility Plant to optimize the project energy or mechanical designs and minimize the project’s carbon footprint. Hot and chilled water mains will be installed within the public streets and open space parcels to connect to each of the development parcels throughout the site to provide energy exchange for the heating and cooling systems in each of the buildings.  Thus, the district system reduces the number of cooling towers required on each building’s roof and provides greater opportunity to program roofs with green active spaces and designs that minimize the heat island effect.

Thirdly, the project is grounded by a unique “curbless” street; which is a shared street between pedestrians and vehicles (with low traffic volumes). Its design is focused on an equitable pedestrian-oriented experience and has no curbs. Stormwater runoff is directed into bioretention areas for treatment. The bio-retention areas and street furnishings are blended with social infrastructure, such the programmed street rooms that are inclusively curated by small designers and businesses. 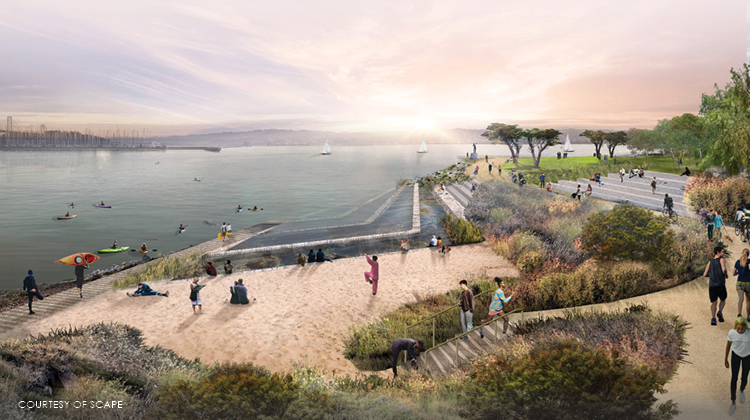 The Mission Rock project embraces various types of bicycle infrastructure. The project design approach was guided by creating a diverse bicycle experience based on the different types of ridership. Designed for cyclists of varying experience, a mixed-use trail along Terry A. Francois Boulevard is integrated into the SF Bay Trail system.  A Class 4 cycle track on Mission Rock Street and Bridgeview Street is designed to provide a more direct connection into the project site for experienced cyclists. The bicycle infrastructure in combination with the dynamic streetscape and accessibility improvements highlights the project’s focus and prioritization on the bicycle and pedestrian experience versus standard vehicular travel.

Another unique part of the Mission Rock project is that there is no on-street parking. Recognizing that universal access is important, a robust loading program is proposed.  The proposed loading zone are on a timed/temporary condition depending on the use. The project streets include commercial loading, vehicular loading, and accessible loading with an emphasis on reducing single occupancy vehicles.  With this approach, the project prioritizes the safety and experience for individuals who are attempting to walk, use bikes, or non-vehicular modes of transportation. 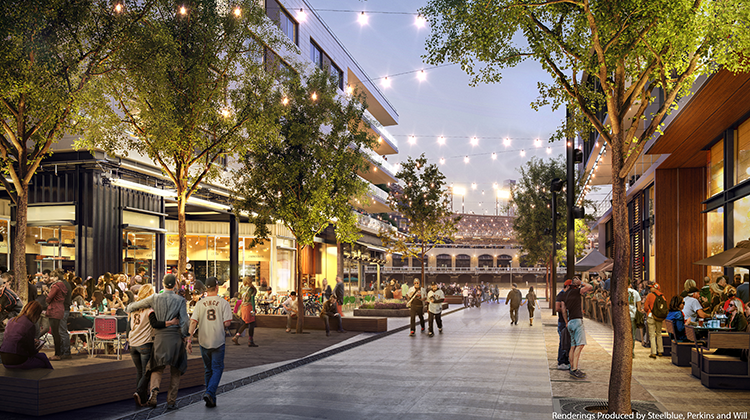 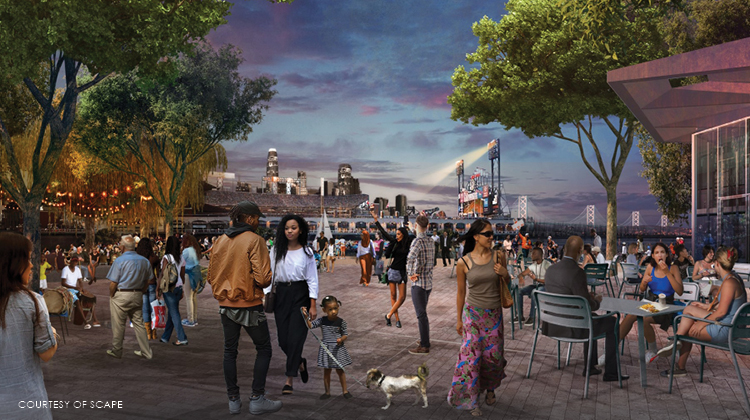